“This is the most heavily photographed episode in the history of Oshawa.” So claimed Thomas Bouckley, photographic historian in his adored Pictorial Oshawa Vol II.

On April 22, 1918, between 5 & 6 o’clock in the evening, a pilot lost control of his plane, and it crashed into the northwest corner of King and Simcoe Street.  Miraculously, only one person was injured in the incident.  A woman named Mrs. Guy was leaving Porter’s Dry Goods at 8 King Street West and was struck on the shoulder by a falling brick.  Thankfully, her injuries were minor.

To take the plane off the side of the building, the wings were removed after ropes secured the fuselage, and it was then lowered and slid down piles placed against the building.  The plane was removed by staff of the Leaside Training camp, with the military refusing to let the local firemen do the removal. 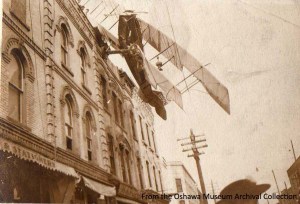 Naturally, an event like this was covered in the local media.  Despite gaps in Oshawa’s historical newspapers, the newspaper after this incident survived, and the Ontario Reformer featured this story on its front page of the April 26 edition.  The Reformer called it a “as fine an exhibition of aeroplaning as will be seen here for many a day,” and the pilot who “swooped up and down over the town like a bird” was acting in a manor “we are told…is mild compared with what aviators in the battle squadrons at the front are called upon to do when in action.”  The Reformer went on to report “something went wrong with the engine… [The pilot] tried to land on the street but was unable to do so on account of the wires.” He ultimately ended up on top of the Dominion Bank building, and wires which acted as a net for the plane were so badly damaged that power in Oshawa and Whitby was knocked out. 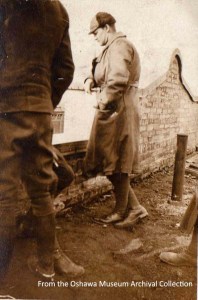 The reporting of the Ontario Reformer seemed to take a light-hearted approach to the story, as though it was a unique sense of excitement.  Reviewing other news reporting of story seems to perhaps take a harsher view.  The headline of The Globe reads “Airman Makes Two Towns Dark,” demonstrating the outcomes from the incident, while the Reformer has the headline “Oshawa Sees an Areoplane (sic) Light on Bank Building” focusing on the incident rather that its outcome. 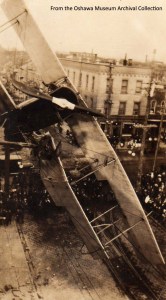 The Globe makes mention of the pilot was “entertaining practically the entire population of this town with his various stunts – looping the loop, figure eight, flying upside down” and the crash was a result of “misjudging the distance” and crashing into the Dominion Bank. 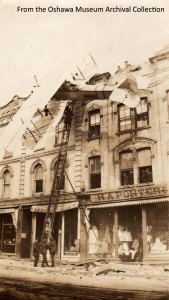 Both the Reformer and Globe say the pilot refused to give his name; The Toronto Daily Star, however, reported that the actions of Cadet Groom of the Leaside Camp would be investigated by the RAF (in Pictorial Oshawa, Thomas Bouckley named the pilot as Cadet Weiss).  Of note, the Star’s reporting on the incident was the shortest of all three papers reviewed.

This incident occurred during wartime; World War I was raging on across the Atlantic, and it was the first major conflict where the skies served as a battlefield.  Looking locally, there were flying fields for training pilots in Leaside and Long Branch, and according to Bouckley, ‘several mishaps occurred in Oshawa.’  The Oshawa Museum’s archival collection features not only photographs of the ‘infamous’ Four Corners crash, but also of a crash that occurred in 1916 at Alexandra Park, a plane that landed on the lawn of Parkwood, and a crash at the Golf Links on April 28, 1918.

While it may no longer be ‘Oshawa’s most heavily photographed incident,’ 100 years have passed and the Four Corners plane crash remains a captivating story from our past.