Do you remember Henry Street in Oshawa? Several years ago, this small street ran between the lots 6 and 7, between Henry House and Guy House in Lakeview Park.  It was a north-south street, connecting Simcoe Street to Lakeview Park Avenue.  It was removed in the 1990s, creating room for accessible pathways and a pedestrian friendly area in Lakeview Park. 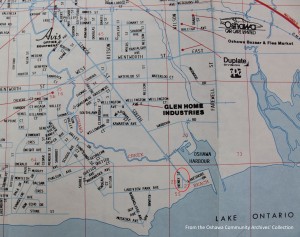 Like many other streets, Henry Street’s name also came from an early settler, and it ran through what was the farm of Elder Thomas Henry.  His family home still stands today as one of the buildings of the Oshawa Community Museum.

There is a wealth of knowledge available about the life of Thomas Henry.  After he died, his daughter-in-law, Polly Ann Henry, wrote Memoir of Rev. Thomas Henry: Christian Minister, York Pioneer, and Soldier of 1812, a comprehensive, and admittedly biased, narrative about his life and times.  As well, the families of our Museum buildings, the Henrys, Robinsons, and Guys, are one of our collecting focuses, and in 2013 an unbelievable donation came to the archives. Now known as the Thomas Henry Correspondence Collection, this donation contained family letters, correspondence in regards to the Christian Church, receipts, and other invaluable documents which provide us with great insight into this man’s private and professional life.

In a nutshell, Thomas Henry was born in 1798 in County Cavan, Ireland.  He came to Canada in 1811.  Shortly after the family’s arrival, Canada was at war, and Thomas worked during the War of 1812 as an attendant to a judge, and he also served some military duty before the conflict ended.  In 1830, Thomas purchased 130 acres of land in Lot 7, Broken Front Concession, East Whitby Township, and sometime between 1830 and 1851, he constructed a stone house, which would later become known as Henry House.

Thomas was married twice, first to Elizabeth Davies, with whom he had one daughter (Nancy, who died in infancy), and five sons.  After the death of Elizabeth, Thomas met and married Lurenda Abbey, and together they had six sons and four daughters.  His family of 15 surviving children always seems to impress guests on tour!

After an illness, Thomas Henry died in 1879 at the age of 81.  It was noted in the local media that more than 85 carriages followed Thomas to his final resting spot in the Port Oshawa Pioneer Cemetery.

To learn more about the life of Thomas Henry, I invite you to visit the Oshawa Community Museum and take a tour through his home! 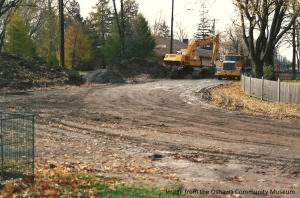 The removal of Henry Street in the 1990s.

Before Henry Street was removed, Laura Suchan, Executive Director of the Oshawa Community Museum, remembers having to stop traffic along Henry Street when large artifacts were being moved between Henry House and Guy House.  The street sign for Henry Street is now a part of the Oshawa Museum collection.

8 thoughts on “Where the Streets Get Their Name – Henry Street”