While on tour, our Visitor Hosts are often asked questions that they may not be able to answer in that moment. This wasn’t one such question as I happened to know the answer, but I thought it could make an interesting post for the blog nonetheless.

I was recently on tour in Henry House when I was asked about the story of the settee in the parlour. It has an interesting provenance. 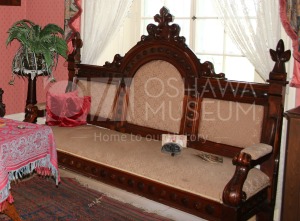 The museum acquired the settee in 1973; before donation, it was used in the Centre Street Church, the same church that Thomas Henry preached at decades before.

Centre Street Church’s origins lay with the Christian Church, officially organizing in Darlington in 1821. A decade later in 1831, Elder Thomas Henry organized the Oshawa Christian Church and served as its pastor. Meetings were held in homes and schoolrooms until 1843 when the first church was built in the area of Richmond and Church (later Centre) Streets. This church served the needs of the congregation for 30 years, during most of which time Rev. Thomas Henry was its minister.

The Christian Church soon became too small for the congregation; a section of land was donated by Mr. and Mrs. Cade, and a new church was built in 1874 on Centre Street, just south of King Street. It was reported that more than 400 worshipers were turned away from the opening service due to lack of room, indicative of the interest and support for the new building. Four services were held on the dedication day on September 5, 1875.

The church, known as the Oshawa Christian Church, was known for its beautiful lofty spire, and it was constructed with white brick with the roof and spire covered with slate.  Installed in the spire was a bell, a ‘crowning touch’ as reported by the Oshawa Times in 1967.

In the 1960s, City Hall was looking to expand, and the church trustees agreed to sell the property to facilitate construction of the Rundle Tower.  The last service at the Centre Street United Church was held on April 30, 1967, conducted by Rev. A.W. Magee.  The congregation merged with the Westmount United, forming Centennial United. Eventually the congregation merged once again with Albert Street United to form Centennial Albert United Church which stands today on the southeast corner of Rosehill Blvd and Bond Street. 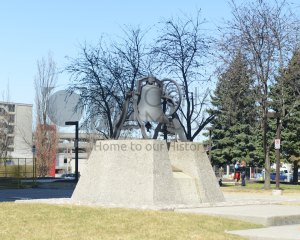 Other vestiges of the Centre Street United Church remain, besides the bench and amalgamated congregation.  The ‘crowning touch’ bell can still be found today outside the Rundle Tower at City Hall, where the church originally sat, and a keystone bearing the date 1874 is a feature of the Henry House Heritage Gardens. 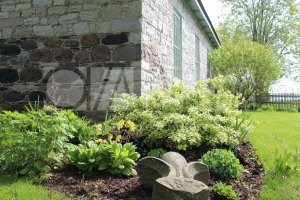 2 thoughts on “You Asked, We Answered: The Centre Street Church Settee”