To some, a skatepark just seems like a slab of concrete, but to others, it’s a place to exercise, make new friends and express their passion.

​David Galloway, a long-time volunteer at Skatelife, a faith-based organization that works with local skateboarders in different communities across Canada, is at the North Oshawa skatepark at least once a week.

Galloway’s favourite moments from the park are conversations. “Sometimes I show up, especially when there are a lot of guys here, and guys I know, I don’t even necessarily get on my skateboard right away. I’m just making rounds talking to people,” says Galloway.

It’s not always about the skateboarding, says Galloway, but it’s about connecting with people and building a community. Treflips, nose grinds and varial heels are all terms you would hear and tricks you would see at the North Oshawa skatepark.

It’s a place for the young, the old – the beginners and also, the professionals.

The 10,000 square foot skatepark opened in 2010. The park was built by New Line Skateparks, a municipal skatepark design and construction company who have finished over 200 projects

The park includes, rails, manual pads, hubbas and quarter pipes, as well as space to pump in order for the skaters to keep their momentum.

Mitchell Wiskel, an Oshawa parks development supervisor, says planning to build a skatepark is similar to any other parks’ development project.

“In the case of a skatepark,” he said, ”we would typically start off by determining if there’s a need for the city through surveys or outside studies.”

While being relatively inexpensive, the parks give youth a place to spend their time and it promotes physical activity. Wiskel didn’t work on the park, but is knowledgeable about the process and says skateparks are beneficial to city’s urban development.

Once it’s determined there is a need for the skatepark, parks development would then decide what the best location is. After that, Wiskell said, they would then focus on the design of the park

Next, an expert skatepark designer has to be brought in. To accomplish this, Wiskel said a request for proposal (RFP) is sent out. Designers pitch their ideas and skills to parks development. This would be contracted out and parks development would oversee this process

Another RFP is sent out to contractors but their pitch is based on price. Parks development hires the least expensive, qualified contractor.

After the design is finished, parks development hires general contractors to build the park. Parks and development decides what company would be hired, as well as the construction process itself.

Once the skatepark is finished, parks development ends their involvement and the city’s parks operation staff looks after the facility.

Wiskel said parks and development is only brought back onto the project if something broke or the park was to be renovated.

Other duties of parks development include organizing public consultations (whether that be through city hall meetings, local surveys or speaking to interest groups – skateboarders), speaking to other city departments that may have a stake in the process and fiscal responsibilities.

“It’s so important to stay involved and to stay involved with the development side of things for Oshawa,” says Wiskel, “because if we didn’t have that involvement, from a public standpoint, there wouldn’t be that buy-in, through the process.”

Wiskel says with strong community feedback we can build much better facilities. “Because we’re building for exactly what those users want.” 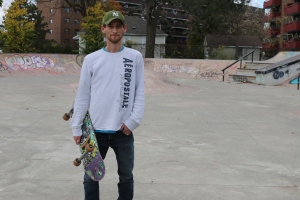 Kyelle Hatherly started skating in 1986. He stopped when he started high school. Back in the eighties, Hatherly said skateboarding was a fad, and he wanted to try it.

Three years ago, Hatherly picked up the board again, since he didn’t have a license and needed a way to get around.

Hatherly says he didn’t have many skateparks around when he was younger, so when he saw the North Oshawa skatepark, he wanted to try it out. He started coming to the park three years ago when he started skating again.

His favourite part of the park is the funbox (a manual pad), but he says, “Yeah, I think it should be bigger, but there’s not really space to add it unless they took out some of the parking lot or something, but yeah, it’s a little small.”

Hatherly tries to make it to the park every day he has off from work.

Who is David Galloway and what is Skatelife?:

David Galloway started skating in 1988. He went to O’Neill. This is where he found his passion. One day he saw students doing a trick called a boneless down a set of stairs.

Even though he said it was a small set of stairs. “They were flying through the air and I’m like, ‘man, I want to be a part of that,’” recalls Galloway who says the North Oshawa skatepark is an integral part of his skating experience now.

He was there skating at the park before it officially opened in 2010.

He tries to be at the park at least once a week, but tries for several times a week.

Galloway says he wants a flatbar added to the park and has heard other people feel the same.

He started volunteering at Skatelife in 1997 in British Columbia, while attending school in Abbortsford. His school gave credits for volunteer hours, so he joined when he saw Skatelife being advertised in a local skateshop.

Skatelife is a non-profit, faith-based organization that works with local skateboarders in different communities across Canada. SkateLife promotes community and friendships. They hold weekly skate clubs where local skaters can meet up, spend time together, learn new tricks, film, etc.

​Galloway says Skatelife focuses heavily on the 13 to 18-year-old age range, but the organization also caters to younger children, as well as adults.

His favourite part is connecting with the skaters. Being a mentor to them and helping them make positive life choices, career paths is important to him.

“Some of these guys don’t have a positive male figure in their life, says Galloway, “and I feel that’s really important, just to be that to those guys.”

Looking at the park, you wouldn’t know the stories of the people who skate there, but taking the time to learn more reveals the Oshawa skatepark has an impact on people in the community.

The land where we stand is the traditional territory of the Mississaugas of Scugog Island First Nation.

Durham College‘s newspaper, The Chronicle, launches a new feature series called The Land Where We Stand, about the hidden stories that shape our region.

This article originally appeared in The Chronicle, February 28, 2018.