You might be asking, what exactly is “Ask a Curator” day?  It started a decade ago with the intention of giving the public access to experts who work in museums, galleries, and heritage sites through the use of social media.  Initially the event started on Twitter; since then it has extended to Facebook, YouTube, Instagram, Snapchat, and more.

From the first year this online event started, it has proven to be popular, attracting cultural, heritage, and science institutions from across the world!

Here are a few questions that were asked and my responses!  If you wish to view the Facebook Live event you can view it on the Oshawa Museum’s Facebook Page.

What COVID-19 artefact do you think will fascinate people 100 years from now? And why?

The inspiring move when local breweries stopped beer production and turned over to making hand sanitizer to help fight COVID-19.  Initially, All or Nothing Brewhouse in Oshawa started producing exclusively for local hospitals, front-line emergency workers, and major utility companies.  A can of All or Nothing Brewhouse’s Hand Sanitizer was the first COVID-19 related object to be acquired for the Oshawa Museum’s collection.

What’s the weirdest thing in your collection?

I can’t focus on just one artefact in particular, but rather a collection of artefacts.  I have two collections which many may find weird, but they are also fascinating!  Our Farewell Cemetery Collection which contains coffin jewellery, the decorative hardware used on coffins.

The other collection is our extensive medical collection, which was used a few different doctors in the Oshawa community prior to the opening of the hospital; when surgeries took place in the home, a kitchen table would have made a great make-shift operating table.  Many of the instruments resemble the tools that are still used today but there are a few which have thankfully…changed with the times.

Do you have a particular Henry Family member that you like best?

The youngest child of Thomas and Lurenda is Jennie (Lorinda Jane) Henry.  I have been fortunate to meet her granddaughter, who spent time in Jennie Henry’s home when she resided on Agnes Street (I said Elgin Street during our Facebook live).  She shared stories with me about the home and has donated various items related to Jennie and her husband, John Luke McGill.

Have you ever broken an artefact?

Yes I have, and of course it was an artefact that once belonged to Thomas Henry, of Henry House.  I broke his tea cup accidently because it had been left in a hutch that was being moved.  Many of the large furniture pieces in Henry House are used to store smaller items such as china cups and saucers, other chinaware, stoneware, vases, glassware, and many other artefacts related to the household.  Fortunately, I was able to repair the china cup because of my collection care training that was provided the Museum Management and Curatorship program offered through Fleming College.

Curator advice: MAKE SURE ALL ARTEFACTS ARE REMOVED EBFORE MOVING A HUTCH!

What is your favourite tool?

I have three tools….beside my computer that assist me greatly with my work on exhibitions and with collections.  My squeegee tool, measuring tape (make sure to measure three times), and 3M Command Strips that have saved so many wall repairs.  The walls of Robinson House thank us each time we use them because the walls in this house are made from lath and plaster.

Ackeus Moody Farewell, “a man of boundless energy, pluck and endurance,”¹ was born in Vermont on January 1, 1782, the youngest of five children.  After the American Revolution, his family was one of many that left the United States, taking advantage of the free land being offered by Lieutenant Governor Simcoe to Americans wishing to travel north and help colonize the newly created Upper Canada.²  Moody and his family travelled north, and it was around 1801 that Moody arrived in an area that today is found around the King Street East and Harmony Road intersection. For some time, this area was known as Farewell’s Corners before becoming the Village of Harmony.  Moody did not settle here immediately, first apprenticing as a hatter, opening an unsuccessful trading post on Lake Scugog, and trying his hand as a crew member aboard the New Nancy. 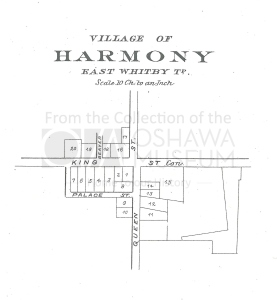 After ‘squatting’ on land north of Lake Ontario for several years, Moody purchased Concession 1, Lot 4 in 1804; in time, he would purchase more land in that same vicinity.  This would prove to be an eventful year for Moody as he married Elizabeth Annis also in 1804. The couple would have nine children together: William, Charles, Isaac, Acheus Moody Jr., Jacob, Abram, David, Levi, and Sarah.  According to Samuel Pedlar, Moody and family benefitted from establishing relationships with the local First Nations, trading with them and learning from their knowledge of the land. 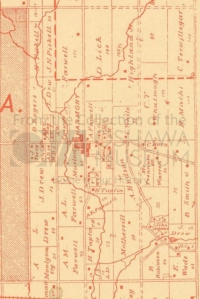 By 1812, he had opened his successful tavern with an interesting story, as this tavern reportedly was used to feed British soldiers and hold American prisoners of war during the War of 1812.  Thomas Conant recalled the tavern in his book, Upper Canada Sketches:

Here a large frame hotel had been built, kept by one Moode Farewell. This was one of the stopping places or houses of entertainment for the military men who passed to and from Montreal and York during the war.

Joviality and good cheer were characteristic of it, and many a merry night was spent there by the British officers. Many times my grandfather saw them call for liquors in the bar-room on arrival, each grasp his glass, touch his companion’s and drink to the usual toast of “Here’s to a long and moderate war.”  Could those old walls speak to-day they would recall the many, many times this toast was given.³

Interestingly, Moody was a firm believer in temperance, the abolition of alcohol, and owning a tavern seems rather against this movement, so by 1837, he had shut his tavern down.  However, after the War of 1812 ended, Moody had built a gristmill and sawmill, so he was still generating an income despite closing down his tavern.

According to local lore, the naming of Oshawa is due in a small part to Moody Farewell.  As the story goes, in the 1840s, local movers and shakers were trying to get a post office for the community of Skae’s Corners, King/Simcoe and area, known as such because of the popularity of Edward Skae’s General Store.  The Province of Canada was willing to give a post office, but because so many communities at the time had the name ‘corners’ in it, they would have to pick another name.  A group were gathered at a tavern when in walks Moody Farewell with First Nations men he knew from his fur trading days.  The Indigenous men were asked what they called this area, and they replied ‘Oshawa’ which means ‘that point at the crossing of the stream where the canoe was exchanged for the trail.’

Moody’s wife Elizabeth passed away in 1851, as per her headstone; he would remarry a woman named Sarah Haviland Coryell before his passing in 1869. 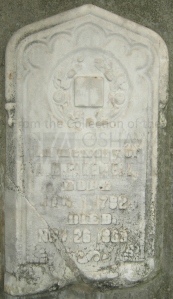 Farewell Street is a north-south artery in the east end of the City of Oshawa, and it runs through what was property owned by Moody Farewell.  Farewell Creek, which starts at the Oshawa Harbour before traversing through Clarington, takes its name from this family, as well as the Farewell Pioneer Cemetery.  This cemetery is located on Harmony Road, just south of King, and it started as a private family burying ground for the Farewells.  By the 1860s, Moody began advertising plots for sale at the ‘Harmony Burying Ground.’  Less than 100 years later the City of Oshawa became the owner of the cemetery; it was closed for further burials in 1968.  The cairn which is a distinct feature of the cemetery was dedicated in 1979 after the city wanted to better showcase the headstones and pay homage to the early settlers of European origins. 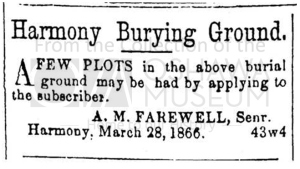 Hello, my name is Jodie and I am a co-op student that started my placement with the museum in early September. My placement here is based around archaeological studies and the aspects of those that are found in the museum. I have been given the amazing opportunity to work with the Harmony Road Farewell Pioneer Cemetery artifacts and I have been cataloging and photographing the collection pieces.

My first day here I was taken on a tour of the houses and taught some facts about the families that lived there and about the other collections that are open to the public. I was then shown the collection storage areas where they keep all of the items that are not on display at the moment and afterwards was shown the boxes of artifacts that I would be working with for the next few weeks. I spent the next few days going over the archaeological report of the site and over articles of the families and other articles that pertain to the site and the families that were buried there for background information and so I would know what to expect when I started to work with the artifacts themselves.

Working on the actual boxes has been incredible; almost all of the coffin decorations are in very good shape and have intricate designs on them and some of the name plate engagements are still legible.  This has been an amazing learning opportunity for me as an archaeology student and I am very thankful to the wonderful people here at the Oshawa Museum for this experience.

The following are artifacts that Jodie has photographed and cataloged from the Farewell Cemetery Archaeological Collection (994.28)