In less than one month, our 2016 feature exhibition will open.  We’re excited to host Freemasonry: A History Hidden in Plain Sight, travelling from Bruce County Museum and Cultural Centre, and with all exhibits, we supplement with local content, so Oshawa’s Masonic history will be featured! In advance of the exhibit opening, I thought sharing the story of Fairbanks Street would be a nice complement!

Silas Fairbanks was born in York (now Toronto) on January 1st, 1821, the eldest son of Levi Fairbanks. He attended Upper Canada College (then located at King and Simcoe Streets) and later studied law under Mr. John Bell. On January 26, 1850, he was elected to the council at the first meeting held by the Village of Oshawa. He remained a member of the council until 1856 when he was elected Reeve of Oshawa.

In 1851 he married Hannah Arkland, daughter of Charles Arkland, and together they had two daughters and a son.

In 1857, he was elected a Grammar School Trustee and served in that capacity until 1871. It was during this time that his parish church (St. George’s) moved to the corner of Centre and John Streets. Fairbanks was a great influence in this move and was also one of the founders of the Sunday School at St. George’s.

Silas Fairbanks was a Freemason. He was initiated into St. John’s Lodge #75 (Toronto) on June 6th, 1859, passed July 11, 1859 and raised August 8, 1859. On July 20, 1860, dispensation was received for Lebanon Lodge, and Silas Fairbanks was named its first Worshipful Master U.D. In 1861, Lebanon Lodge #139 received its warrant of Constitution with Silas B. Fairbanks as Worshipful Master. In the following year (1862) he was re-elected Reeve of Oshawa. In 1864 he was installed as Worshipful Master for third term and the Lodge recorded its first initiation, Mr. Patrick Duffy.

In 1866 he was appointed to command the 34th Provisional Battalion when it was formed, a command he held until his death. This was also the year that Silas Fairbanks and William McCabe, both members of Lebanon formed Pentalpha Chapter Lodge.

Silas died on August 15, 1871, at the age of 50. The Town of Oshawa closed down for the day of his funeral; recorded as the largest ever held in the Town.  The Ontario Reformer reported on his funeral:

Friday afternoon last will long be remembered by the citizens of Oshawa, and the date of the most imposing funeral that has ever taken place in Oshawa – that of the late Lt. Col. SB Fairbanks.  The village wore a mournful look – business suspended, shops closed… and the streets lined with a mass of sad spectators.  The funeral procession was formed… in the following order: No 1 company of volunteers, battalion band, No 2 company, two lodges of Odd Fellows, representatives from various lodges of Free Masons, the horse, drawn by four black horses led by volunteers… then followed by members of parliament, village and county councillors and a long procession of mourners and sympathizers.

It is interesting to note that Fairbanks, a man of importance in the Masonic history of Oshawa, does not have any symbolism on his tomb.  This is likely because Freemasonry was regarded as a secret society, and it wasn’t until years later that Masonic symbols were used with frequency on gravestones.

Fairbanks is a fairly established street in our City; one of the earliest maps we have is from 1877, and Fairbanks is seen, an east-west street between Simcoe and Centre.  Today, the street extends slightly west of Centre, and it is the street that connects southbound Centre and northbound Simcoe, where the one-way streets join up again to become two-way.

Freemasonry: A History Hidden in Plain Sight will be on display at the Oshawa Museum from May to September 2016. 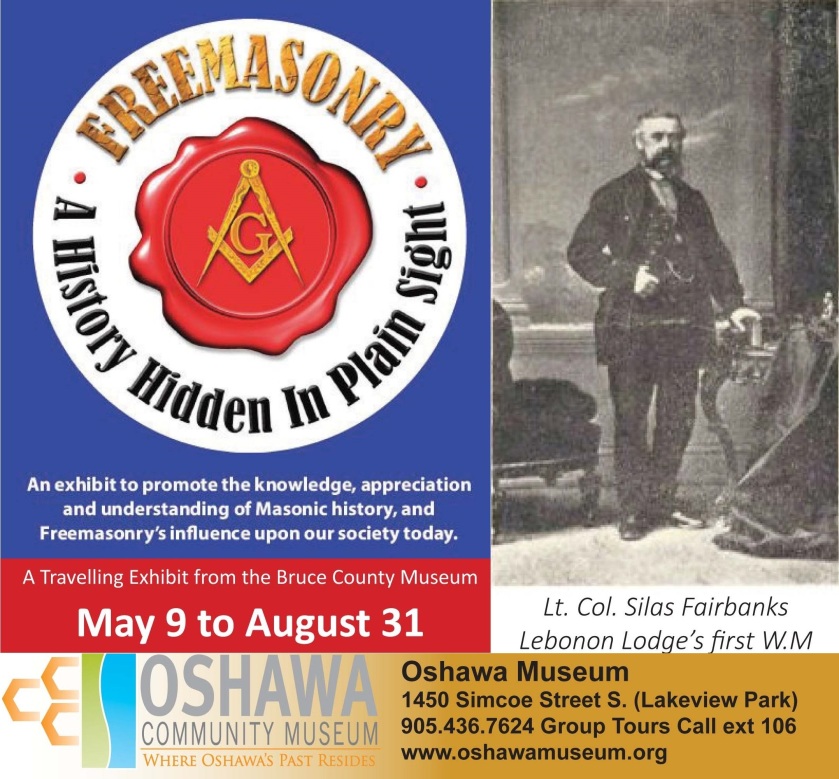