The month of May marks the start of Asian History Month, a time to celebrate and recognise the significant contributions that Canadians of Asian heritage have made and continue to make to the growth and prosperity of Canada. As early 1898, there have been Chinese-Canadians choosing to live in Oshawa to operate successful laundries and restaurants. Despite discrimination and anti-Chinese legislation, these early Chinese families called Oshawa home.

One family in particular was the Chow family, who operated popular restaurants Chow’s Restaurant and House of Chow. This past fall I was given a family history by Gordon Chow, the grandson of George S. Chow who first came to Oshawa in 1926, taking over the management of the Central Café. It was located on King Street just west of Simcoe, below the hotel of the same name. Its chief competition was the Globe Café, a few blocks east.

George had first arrived in Canada sometime in the early 20th century, working in restaurants in Alberta before travelling east to open a restaurant with a partner in Napanee. George’s grandson, Gordon Chow, recalls of stories where they would play Mahjong in the upstairs room, often joined by the Chief of Police.

After some lean years, in 1926, George decided to move a little west to Oshawa to take over the management of the Central Café on King Street. Its proximity to Toronto made it ideal to gain access for restaurant supplies and fresh foods.

George returned to Oshawa and continued to work at the Central Café, sending money back to China to support his wife and son. Due to the Chinese Exclusion Act of 1923, they could not join George in Canada, and he himself was only allowed to leave Canada for up to two years before being barred himself.

When Japan invaded China in 1937, starting the second Sino-Japanese War, this separation would have been more strained, particularly as the conflict became a part of the much bigger Second World War. Many Chinese perished due to the conflict in Eastern China, but many more died from starvation. George and many other Chinese living in Oshawa banded together as all other Canadians did, to raise money to support the war effort. In the photo below, featured in a GM’s War Craftsman magazine, George is standing in the centre back row.

Fortunately, George did reunite with his wife and son, Roger, in 1949, after Chinese exclusion was lifted to allow families to come to Canada.

After the war, George decided to open a new restaurant of his own, partnering with Harry Chow. It was called Chow’s Restaurant and located at 19 King Street West. This location was once Kwan’s Restaurants, operated by Alice Kwan who decided to retire and move to Toronto. The restaurant did well and George became the sole proprietor after Harry decided to sell his shares to him. The business was eventually passed on to Roger in the late 50s and renamed it House of Chow.

Roger and his wife went on to have five children. However, due to the long hours at the restaurant, some of the children often lived with their grandparents, until the family was able to buy a house. Gordon recalled the restaurant had become a popular hang-out spot for local teenagers.

Roger was also a large supporter of the local police, making appearances at any police functions and the charitable police hockey tournament for more than 30 years. He would often provide meals for police association events. When Roger passed away the police provided an honour guard and pall-bearers during the funeral, as the only civilian non-police honorary member of the Durham Regional Police Association. Roger was also an honorary member of the Canadian Corps, and member of the Royal Canadian Legion.

Gordon and his siblings went into the restaurant business themselves, despite their parents wishes for them to otherwise. They opened the Jade Garden in Oshawa and it did so well they partnered with another family to open Jade Garden 115 in Orono. After many successful years, the Orono restaurant was forced to close due to the highway construction in the 80s. When the lease expired on the Oshawa location in 1991, the Chow’s decided it was time to close the restaurant and move onto other things. Gordon became an IT Manager the following year, where he worked until retirement.

Many thanks to Alex, who spent 6 months researching Oshawa’s early Asian history, research which will be part of a book about Oshawa’s unwritten history.  We hope to publish this book as a way to commemorate Oshawa’s 100th anniversary of being a city.

Early Asian history in Oshawa has become a research focus for myself, as I work with the archival collection to help tell a more inclusive, diverse and accurate history of Oshawa. By shifting the focus away from the traditional local history narrative that focuses on the accomplishments of the wealthy white settlers, we are able to learn about all members of the early Oshawa community and this helps us to better understand how our early roots have contributed to the community that we are today.

Immigration, along with the skills and work ethic each wave of immigrants brought with them, helped Oshawa to become an industrial hub in Canada. The 1911 census for Oshawa shows an influx of people arriving from Poland, Ukraine, Russia and other Eastern European countries. Perhaps sensing the potential for war or wanting different opportunities for their families, Oshawa was a popular spot to begin life in a new country.

Some time between the 1911 and the 1921 census, a small Chinese population of 18 people, arrived in Oshawa. Of those 18, 5 belonged to the family of Mrs. Wong Shee Soo. Mrs. Soo came to our attention as while touring through the large Mausoleum at Union Cemetery. Amongst the familiar names of Conant, McLaughlin and Storie, her name stood out as being very different and we wanted to know more about her. 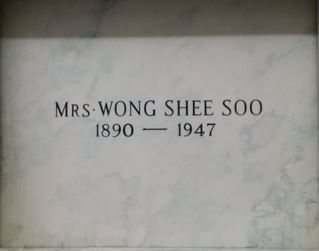 Looking back it becomes clear that Canada’s treatment of Asian Canadians has been problematic. From the head tax that was placed on only Chinese immigrants, to the Chinese Immigration Act, which actually prohibited entry to Canada, and to laws dictating where Asians could live, work and associate with, the history of Asian Canadians has been dark.

How did the Soo family end up in Oshawa? In 1921, Oshawa had a population of approximately 13 000 people. Of that 13 000 people, 18 are listed in the census as being Chinese. There are no people of Asian descent, including Chinese, listed in any of the previous census records.

The earliest records that show the family in Oshawa are the 1921 Canadian Federal Census for Oshawa and the 1921 City Directory for Oshawa. At this time, the family of 5 lived on Simcoe Street and Min Soo ran a restaurant called the Boston Café. The Soo family owned the Boston Café until sometime between 1934 and 1938 when they then operated the Eden Inn restaurant. The Soos lived in a very ethnically diverse area, with people listed as being Ukrainian, Polish, Jewish, and Russian.

Research into this family is ongoing. We have actually been in contact with the granddaughter of Wong Shee and she is happy to help us with our research. As with my research into early Black history in Oshawa, this research is difficult as early records concerning the Asian population’s contributions to the community were not archived. This is an important story and an important aspect of our community’s history and so I will continue digging and continue to collect any information I can find.