This blog post was inspired by our recent partnership with Myseum of Toronto’s Discounted History exhibit that explores the movement of goods, services and ideas that form part of Toronto and the surrounding GTA’s retail landscape.  Following this theme of retail and let’s take a glimpse into the lives of our forebearers that turned this season of goodwill into the modern money commercial season it has become.  The message of Christmas has been drowned in a frenzy of competitive present-buying and consumption on an almost obscene level. However, this complaint is not new; it stretches back to the last quarter of the 19th century, a time when many of us believe the holiday season, infused by the spirit of Dickens, was more homely, wholesome and spiritual.

While there is no doubting the fact that the Victorians in the latter part of the 19th century, partly inspired by Dickens, were fascinated by the celebration of Christmas, they didn’t invent it.   Rather they reinvigorated it and brought together the many Christmas customs of Britain and threw themselves into the season in a way not seen before. Being a nation of manufacturers, industrialists and shopkeepers, it was not long before our forebearers realized that Christmas, with its emphasis on generosity and hospitality could be exploited for commercial possibilities. 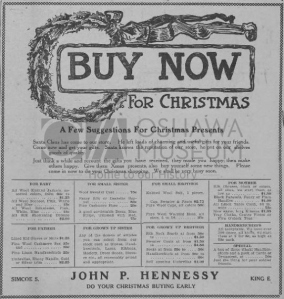 The merchants advertised their Christmas stock on printed posters and in newspapers, hoping to catch the attention of holiday shoppers.  They also used the printed ads as well as handmade posters to thank their regular customers for their business over the past year and wish them season’s greetings.  The Christmas season meant increased business for the average local store in the late nineteenth and early twentieth centuries.  The store would be stocked with many specialty items such as exotic fruits, spices, holly, mistletoe and glass-blown ornaments, as well as staple products to ensure that the customers found all that they needed for their holiday preparations.  Ads in local newspapers such as the ad above from the Ontario Reformer, December 1915 showcases lists of items specifically for sisters, brothers, mothers, and fathers.  They make your list making easy by offering suggestions for these individuals in your life. 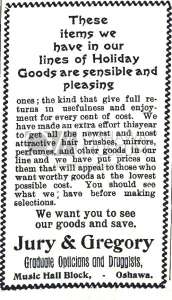 The local store was not the only retail outlet to recognize the commercial importance of Christmas.  Through their own advertising, pharmacies promoted some of their own products, such as eye glasses, as potential Christmas gifts.  The chemist could rely on an increased demand for medicines by Christmas as winter brought with it the cold and flu season. Everyone knows about the last-minute Christmas shopping rush. “Consumer madness” is not only a feature of modern society but was well known at the end of the last century when a shift could be observed in the custom of giving presents. Shopkeepers were clearly the first to benefit from this “consumer madness.” Around December 10, owners of department stores and grocers would begin their newspaper advertising campaigns. Since presents and food were bought customarily between December 21 and 24, merchants stepped up their hard-sell strategy in the newspapers on those days to attract even more customers.

The desire to entice custom instigated another new tradition – in the increasingly sophisticated art of window-dressing.  At Christmas time, large department stores would mount displays of the most beautiful toys and gifts in their windows and inside the store to give to those nearest and dearest. These beautiful shop windows were a definite attraction for passers-by and always aroused vivid emotions and daydreams.  By the 1900s the stores along the main street in towns such as Oshawa and department stores like Eaton’s in Toronto were putting enormous efforts into outshining their rivals’ Christmas displays.  Gordon Selfridge was one of the great impresarios of Christmas windows. Indeed it was Selfridge who coined the phrase “only X shopping days to Christmas.”  Another equally effective strategy was to suggest to customers that they do their catalogue shopping when it suited them.

The Eaton’s catalogue would have been available for customers to order from at your local store.  For instance the Sears Wish Book was available up until their closure in early 2018.  One annual tradition that can be held above the company’s closer – is the Sears Canada Wish Book.  Even the name Wish Book evokes holiday nostalgia. I know my family misses our annual Sears Wish Book that used to arrive in the early fall every year.  Online catalogues just don’t carry that same nostalgia that flipping through shiny pages of toys, household gadgets clothes and so much more, could be found in the Annual Sears Wish Book.  Today many merchants still send out their “Christmas Wish flyers but nothing compares to the Annual Sears Canada Wish Book.

Melissa’s latest video podcast looked at this topic, and you can watch it on your YouTube Channel here: https://youtu.be/_qn8PUMGJho