Did you know that Oshawa was once home to the largest makers of hand-painted pottery in Canada, as well as the only artware pottery in the Dominion of Canada?  Smith Potteries operated in Oshawa from approximately 1925 to 1949. 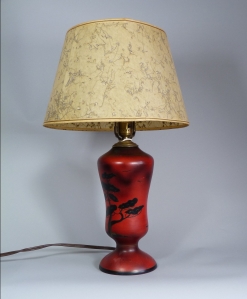 This collection of artefacts held at the Oshawa Museum is remarkable in that each piece is unique, all individually hand painted.  Smith Potteries produced a range of products such as vases, bowls, candlesticks, lamp bases, ashtrays, and other souvenir novelties with hand painted designs.  Each piece features a maker’s mark that can be found on the bottom of the piece that was either in the form of a stamp or decal – which is most common. The decals are round with gold trim and red centres.  They read “Smith Potteries / Velta Artware / registered / Made in Canada / Oshawa, / Ont.” 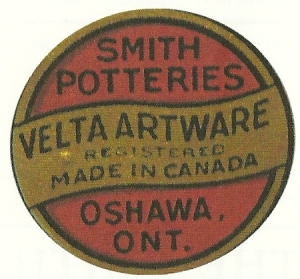 The business opened in 1926 and was located at 353 Kingston Road West and Alexandra Boulevard (today King Street West and Grenfell Street); it was originally owned and operated by Herbert C. Smith.  Mr Smith had previously been the chief accountant for General Motors.  When the plant opened, the head of the mechanical department was A.E. Barker, of Foley-Potteries, Staffordshire, England.  There were seven employees when the plant first opened in Oshawa.  Herbert Smith was manager of the plant from approximately 1925-38.  His brother, Fred A. Smith managed the company from 1939-48. 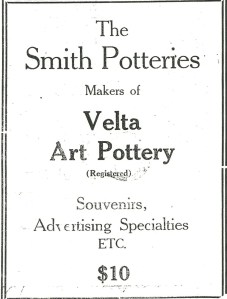 The pottery was highly sought after and shipped across North America.  Locally, two other businesses were selling Smith Potteries, D.J. Brown in Oshawa and J.M. Hicks in Whitby, while Smith Potteries also sold retail directly from the store located in the same building as the plant.  Smith Potteries was so successful that they expanded their business in 1930.  Their production of a specialized semi-porcelain pottery, also known as white ware, made Smith Potteries competitively successful with other countries, such as the United States, China, Britain, Japan, Germany, Sweden, and Czechoslovakia.  The white ware pottery was resilient and of fine quality; it was a mixture of clay shipped from England, Kentucky and Saskatchewan.  According to an article published in the Toronto Star in October 1926, they were experimenting with local clay from the area.

A keen businessman, H.C. Smith installed a gas station in the front of the store in order to attract tourists and motorists looking to purchase souvenirs.  Also on the premise was another Smith family operation, Smith Sporting Goods, which was in business until 1968. 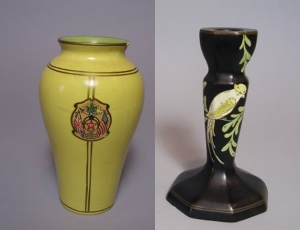