“Worn smooth like a Buffalo run, caused by the action of countless feet for many generations, many years before white men entered this part of Canada.”
– Samuel Pedlar Manuscript, Frame # 326

In honour of Indigenous Month we are taking a look at an interactive map that is found in our exhibition: A Carrying Place: Oshawa’s Indigenous Story.

From the earliest days the First Nations used pathways and “carrying places,” or portages for hunting and trading. Scugog Carrying Place is one of several routes and carrying places that connected the interior of the Province to Lake Ontario.

This area of Oshawa was an important carrying route for First Nations.  The Oshawa Creek was much larger than it is today and groups would congregate here every spring and fall to fish. 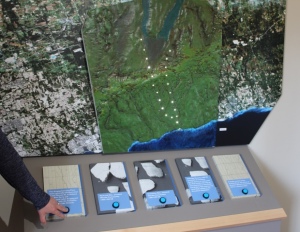 Let’s take a look at the map featured in our exhibit.  Numerous maps were used to create this map.  We wanted to ensure that we were placing the carrying place trail fairly accurately; it is difficult to be exact since there are very few maps which note its location.  We used the latest Google map of the area, a topographic map, and a map from 1795 called ‘C31 Whitby Township Plan’ created by Augustus Jones and William Chewett, who were early surveyors of the township.   Using these three maps for reference and overlaying them against each other, while noting the changing shoreline along Lake Ontario over the years, we were able to place this early portage route that originally ran through the forest and connected Lake Ontario with Lakes Scugog and Simcoe and Kawartha Lakes.  Many have suggested that is basically follows today’s Simcoe Street.

In an interview with Dave Mowat, Consultant, Membership and Land Supervisor at Mississaugas of Scugog Island First Nation, he stated, “there is the Old Scugog Carrying Place Route that came down from the lakeshore at Oshawa made its way up to Lake Scugog here and eventually to Georgian Bay.  If you can think of how the land was utilized before we had the 401 before we had all the highways and byways when you think about how the land was utilized some of our original roads are on old portage trails and carrying places, Simcoe Street relatively follows the original Scugog Carrying Place.”

The trail can best be described as an inverted “Y”.  From Lake Ontario, one branch went northward by Harmony Creek and the other by the Oshawa Creek. Canoes would have been used as far up the creek as they could go before portaging.  The two footpaths converged near the present Columbus and then united to cross to the location of present day Port Perry.

There are numerous archaeological sites found along the carrying place.  Many of these sites are located along the eastern branch of the Scugog Carrying Place.  Two of these sites are located in Oshawa.  Grandview Site, a fifteenth century ancestral Wendat (Huron) village, was located within several hundred yards of the eastern branch of Scugog Carrying Place along Harmony Creek.  MacLeod Site was also a fifteenth century ancestral Wendat (Huron) village that was located further west from Grandview Site.  These villages relocated and migrated north.  There were numerous other sites found along the trail outside of Oshawa.  The oldest sites dating between 1380 and 1450 CE are found at the Grandview and MacLeod Sites.  The ancestral Wendat vacated the area around the Scugog Carrying Place by the end of the sixteenth century and migrated north into Huron-Wendat territory.  This trail most likely fell into disuse until the Mississauga came to Lake Scugog and Lake Ontario.  The Mississaugas used the trail at some point after 1700 and it was in use in 1795 when the first survey was carried out by Augustus Jones.

Let’s take a look at the specific areas noted on this map.  There is the actual Scugog Carrying Place route which generally followed what is now Simcoe Street in Oshawa and Port Perry and connected Lake Scugog and Simcoe, with the Kawartha Lakes and Lake Ontario.

MacLead and Grandview Sites are highlighted on this map to give our visitors an indication of how close these sites were to this trail.  Also noted on this map is the possible location of Benjamin Wilson’s homestead that as can be seen from this map is now located somewhere in the lake away from the current Lake Ontario shoreline – this is due to the fact that the shoreline has receded over the years.  The last item highlighted on this map is an Ossuary in Uxbridge, that dates to 1490 C.E. consisted of secondary burials. (Every so many years the first burials were dug up and reburied in a communal burial plot, a ceremony and feast would have been held.  The Wendat believe there are two souls with a person, one goes with the person in the ground and the other goes to the Creator.  So every one of the bodies that is laid to rest in this burial have a soul.)  This ossuary was most likely related to the Grandview Population.

If you wish to see this map in person and discover more about our local Indigenous story here in Oshawa, be sure to visit us at the Oshawa Museum.

The Archaeological History of the Wendat to A.D. 1651: An Overview. Ronald F. Williamson, 2014

2 thoughts on “The Scugog Carrying Place”