The year is 1937. The City of Oshawa has grown to 25,000 citizens. Alex C. Hall is the Mayor. An unforgettable strike in the history of Oshawa was about to unfold at the city’s General Motors plant.

On April 8, 1937 3,700 workers walked off the job and did not return to the lines until a settlement was struck weeks later.

This strike became pivotal to the future of labour relations throughout Canada.  The Toronto Star reported on the strike and described it as an orderly event – “a stand-up strike not a sit-down strike” and even saw 260 women joining the men on the picket line.

The strike began quietly.  Workers arrived at 7 am to begin work.  The day changed when, at 7:05 workers peacefully exited the plant and went on strike. 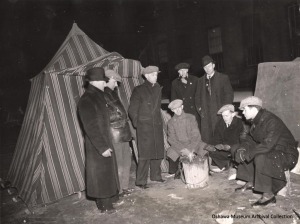 Simultaneously, 400 pickets are flung up around the works with pre-arranged precision.

Despite the calm air surrounding the striking workers, the provincial police were mobilized in Toronto in anticipation of potential violence.  At the same time, the Liquor Commissioner, E.G. Odette, chose to indefinitely close the liquor store, brewer’s warehouse and all beverage rooms to prevent any disorder. 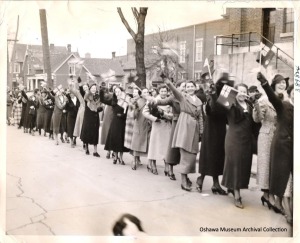 Why strike?  Workers in Oshawa were demanding recognition of the United Auto Workers union.  The UAW was an affiliate of the recently created Committee for Industrial Organization (CIO; later Congress of Industrial Organization), a group that was working to organize industrial workers throughout the US. This group was not seen as a positive step by General Motors management and they, along with Ontario Premier Mitchell Hepburn, worked to keep the CIO out of Ontario. Both the company and the premier wanted a pliant labour force – unorganized, impotent and cheap. To break the strike, Hepburn even created his own police force, known irreverently as “Hepburn’s Hussars” and “Sons-of-Mitches.”

The GM workers’ requests were simple: an 8-hour day, better wages and working conditions, a seniority system and recognition of their union, the new United Automobile Workers. The strike carried on for over 2 weeks. Fearing a loss in the marketplace to competitors, General Motors eventually capitulated and the strike ended on April 23, 1937.

This major confrontation between GM and its workers in Oshawa in 1937 effectively brought about industrial unionism to Canada. “In 1937, when several thousand members signed union cards, the hopelessness of the depression gave way to a new hope, a new confidence. UAW 222 was born” (Local 222).