In the Oshawa Museum’s collection, we have a unique artifact that I am sure many culinary historians would like to try out if they haven’t already: a Meat Juice Press.  Back in the late 1800s this item was considered a must-have for many affluent households.  The reason being that during the 1800s meat juice was used as a concentrated form of nourishment for the ill.  This particular style of meat press would have been used to extract juice from beef, boiled mutton, tongue or boned turkey.  This one is heavily embossed.  On one side it reads “LANDERS, FRARY & CLARK NEW BRITAIN, Connecticut U.S.A.” and on the other side it is embossed “COLUMBIA MEAT JUICE PRESS MADE IN U.S.A. 1”

Columbia was an early brand name used by Landers, Frary & Clark. The company was founded in 1882, when Landers and Smith Co. acquired Frary & Clark, a well-known manufacturer of housewares and hardware.

This particular press measures 7 1/2″ Tall, 4 1/4″ wide (not counting the handle of the masher). It is comprised of four cast iron pieces that can be separated.  The press, pressing handle and a frame that has embossed lettering on both sides and the fluted cup which contains a spout for pouring the extracted juices.

This household item would most likely have been used to make “beef tea.”  If you open a book about 19th century dietary remedies it would be hard to find one that does not mention beef tea. It was a type of broth – made with beef and water – given to patients to drink if they were suffering from digestive problems, fever or weakness. People believed that the tea was nutritious and easy on the stomach, which would help patients to return to their former fortitude.

The benefits of making and drinking beef tea were featured in numerous cookbooks in the 1800s.  The following information was taken from an 1887 cookbook:

The liquid obtained contains all the nourishing qualities of the flesh and none of the indigestible structure, and it is much more palatable than ordinary soup or beef tea and is decidedly more nutritious.

Don’t confuse Beef Tea with today’s beef broth.  Beef tea and beef broth are very different. Beef tea, is almost like a distilled essence of beef, (similar to the French l’essence de boeuf) very intense, and powerful nutrition when someone is sick and ailing.  It would be particularly useful after surgery, especially with blood loss, because of the iron in it.  Two recipes were found on the Royal College of Physicians of London England’s website and explains how to make beef tea.

Start by browning half a pound of super-lean, flavorful beef (something like eye of round or blade steak, trimmed of fat and connective tissue), cut it into small cubes and place them into clean mason jar with a lid.  This jar would then be placed into another large pot of water.  Loosely cover the large pot containing the jar and allow it to simmer for 2-4 hours.  It will concentrate into a distilled form of liquid beef.  After 2-4 hours, place the beef cubes into the meat press, the screw on the press would be raised and the pressing handle removed from the cup and the meet placed in the cup and the press handle placed back on top.  The screw of the press would be lowered and pressing the meat. Keep the liquid that is pressed from the beef, along with the liquid that remained in the jar after simmering and mix them together to create beef tea.  When it cools the liquid solidifies into a thick gelatin.

Below is another image taken from The Pharmacopoeia of the London Hospital.  This was in a guide created to aid staff and students of the hospital in the art of prescribing.  It covered how to take notes on patients, prescribing for children and diets for patients.  Beef tea was featured heavily in the meal plans.

Beef tea would have also been given to soldiers serving overseas.  Florence Nightingale detailed the average daily issue of special dietary items for the War Office.  Top of that list was 25 gallons of beef tea. 80 lb of meat would have been used to make this tea.

Beef tea can be served either in its raw state or gently cooked.  Don’t confuse Beef tea with todays beef broth.  Beef tea was richer and thicker than our traditional beef broth today and contained much for nourishment in comparison to the water downed broth purchased in stores today.  Today’s Bovril, which is the trademarked name of that thick, salty meat extract, developed in the 1870s in Canada by a Scotsman named John Lawson Johnson. The product was originally called “Johnston’s Fluid Beef” and its creation stemmed from beef tea but in a simpler easier to use form. 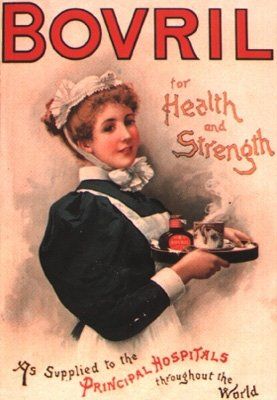 2 thoughts on “ArteFACTS: About the Meat Juice Press”