By Jennifer Weymark, Archivist; originally written for the Oshawa Express, 2011.

Oshawa’s longest serving medical doctor was born in Rochester, New York, to Scottish parents on October 28, 1853.  He was the youngest child in a large family and the only one not born in Scotland.

When Dr. David Scott Hoig’s parents immigrated to Canada and settled in Toronto, he moved to Oshawa to live with his sister and attended the Centre School as a child. He went on to pursue a medical degree and graduated from the University of Toronto in 1880. Following an internship with the College of Physicians and Surgeons in New York, Dr. Hoig returned to Oshawa where he set up his private practice, first at 7 Athol Street, then in his home at 245 Simcoe Street North.

In 1885, Dr. Hoig married Alice Loscomb and together they had two daughters, Marjorie and Dorothy.

Dr. Hoig was not only a dedicated doctor he was also actively involved in community activities. He was an engaged board member for the Board of Education for 20 years and the Library for 15 years. He was instrumental in the founding of the Oshawa General Hospital and served as the medical superintendent there for 25 years. In 1933, following his retirement from private practice after 53 years he  changed gears and held the position of medical examiner for an insurance company.

Dr. Hoig’s interest in literature inspired him to publish many of his observations and experiences in Oshawa in his book Reminiscences and Recollections.  He describes this work as “an interesting pen picture of early days, characters and events in Oshawa.”  Reminiscences and Recollections includes anecdotes on well known prominent citizens of Oshawa and their families, such as the Farewells and the Gibbs. It also outlines brief histories on Oshawa’s industries, including the McLaughlin Carriage Company, R.S Williams Piano Factory, and Joseph Hall Works. His passion for education is reflected in his chapters on the Demille College and Bishop Bethune College.

Dr. Hoig’s passion for medicine remained steadfast until the day of his death in 1939. He still held the position of Dean of the Ontario County Medical Profession when he passed.

Saturday, October 1 is Doors Open Oshawa! The theme for 2016 is Medical Science and Innovation.  Henry House is open from 12-4pm where we will have a pop-up exhibit on Oshawa’s Medical History! 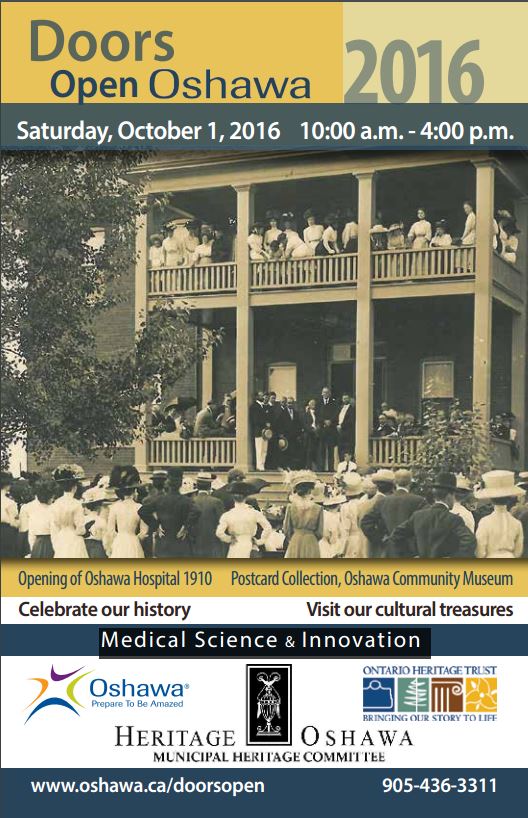