All articles are from the Oshawa Daily Times

The army announced that it’s trying out a new, junior-sized model – about two feet across and weighing five pounds.

There’s nothing scary about them, though, unless one hits you. They’re intended to be filled with water, gasoline or other liquids and dropped from aircrafts to supply troops in the field.

The Quartermaster corps described this new what-is-it as “a disc-shaped container made of synthetic rubber.” When filled, the announcement said, the five-gallon container “looks like an inflated pancake,” with a flat rim running around its outside edge.

These overstuffed pancakes are dropped without benefit of parachute. Tests have shown that the container may be dropped many times without damage. 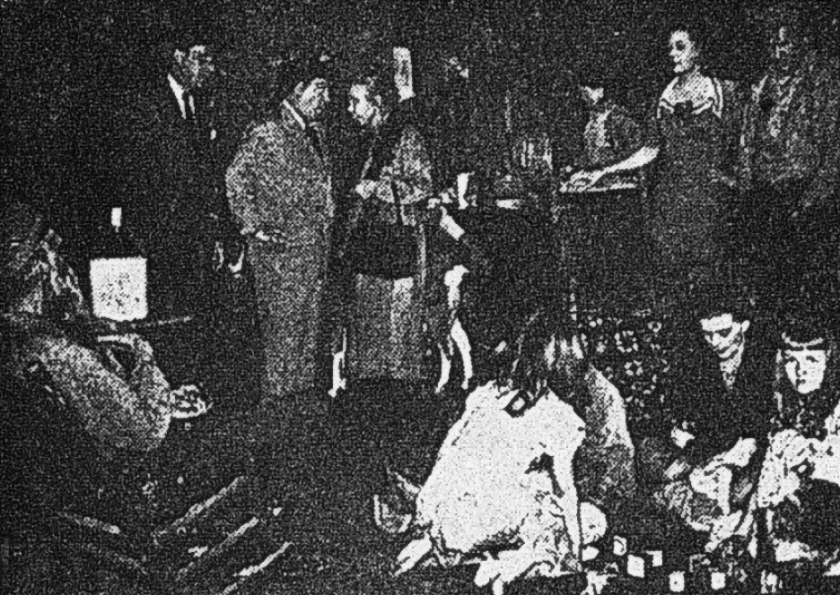 Opens this Sunday midnight at the Plaza and continues Monday, Tuesday and Wednesday.

Fashion Flashes
LOOKING AHEAD to next winter, it would seem that the beaded dress will be increasingly important at gala events. Many late summer evening dresses are of pastel net or tulle, richly beaded  in iridescent sequins, pearls, rhinestones; some for the entire bodice and others n scattered, all-over motifs.

EXTENDING from the stole and sweater of lacy wool knit, some houses are showing handsome one piece dresses that are non-wrinkling and pack like a charm. One model, done in many colors, is in a Venetian lace stitch, and has a deep oval neckline, short sleeves, and wide, side-tied sash. Little wool daises are appliqued here and there all over the dress, and the sash ends are scalloped.

NEW ATTEMPTS TO SCALE MOUNT EVEREST
British mountain climbing experts are making a new attempt to scale Mount Everest in September. Eric Shipton, leader of the expedition, says the party hops to start their climb by September 20, allowing six weeks for good weather after the Monsoon and before the winter blizzards begin. 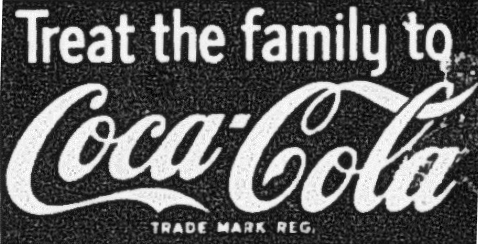 CALLING OFF RCAF PLANES FROM SEARCH
Kapuskasing (CP) – A number of the planes engaged in the wide spread search for Toronto Maple Leaf hockey player Bill Barilko and Timmins dentist Dr. Henry Hudson will be withdrawn Sunday. The two men have not been reported since they took off from Rupert’s House on James Bay 20 days ago.

On Sunday three long- range RCAF Lancaster bombers will be retured to their bases where, it was announced, they are needed to meet “training commitments.” They will carry back RCAF personnel and Toronto newspapermen on various pointes to Southern Ontario.

Twenty men under Flt. Lt. “Rusty” Ruston will continue the search of the tree and lake-covered regions of Northern Ontario and Northwestern Quebec. A Dakota aircraft will also be based here for the hunt.

Today the Lancaster’s and four Lands Department Beaver aircrafts, an RCAF Norseman and helicopter will make their final sweep over the district.

Ottawa to Be Military Capital of Free World 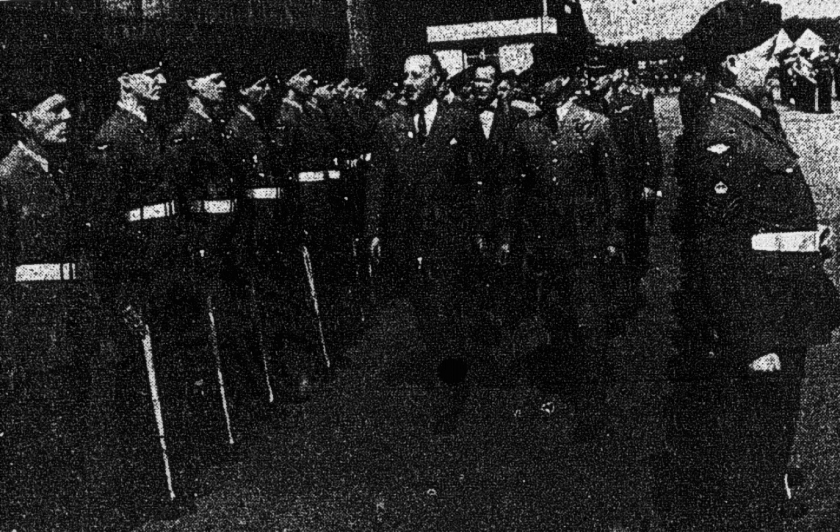 Eyes of the world are focused on Ottawa, Canada’s Capital city, as statesmen and top military men of the 12 Atlantic pact countries gathered for their first conference in Canada. Delegated to NATO, history’s greatest peacetime collective security pact, are conferring on costs of building up defense facilities in Europe. Their decisions might well determine whether a third world war can be prevented. Foreign Minister Paul Van Zeeland, head of Belgium’s NATO delegation and chairman of the NATO conference, is seen inspecting RCAF guard of honor, shortly after his arrival at Ottawa airport. In the background can be seen External Affairs Minister Lester B. Pearson.

Catch Tram To Gold Rush
Montreal (CP) – Want to go on a prospecting trip for gold? If you live in Montreal, it’ll only cost you tram fare.

Of course, the only good claim is already staked, but it’s fun watching.

It seems the Canadian Copper Refiners Ltd. Have been pouring the stuff into the St. Lawrence River for 20 years and now they are going after it.

When the company processes copper ore, particles of gold and silver, too small a percentage of the whole to be worth recovering at the time of processing, are flushed into the river.

The resultant sludge is dumped by pipe into a cove, protected from river currents. Now, the company has a small dredge dipping samples of the 20-year accumulation of muck to see if there’s enough gold there to make it worthwhile going after. 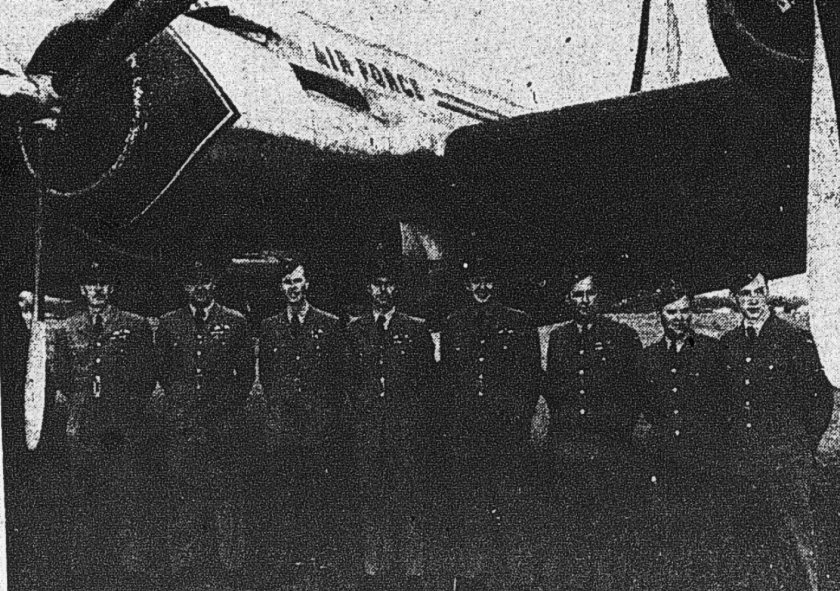 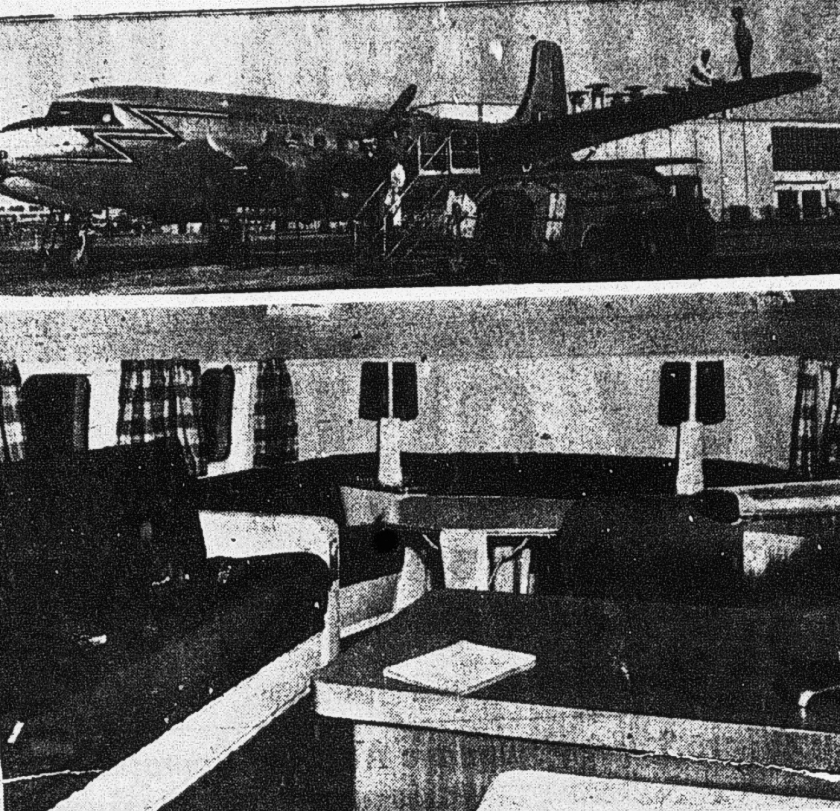 Canada’s most luxurious plane, the RCAF Transport Command’s C-5, has been overhauled at Canadair Limited near Montreal in preparation for use by Princess Elizabeth and Duke of Edinburgh during their Canadian tour. Top picture shows the giant Canadair-built skyliner being fuelled prior to a test run at the company’s field. Below is one view of the beautifully appointed lounge, which will provide a home aloft for the Royal couple. During long light trips, the lounge becomes a bed-sitting room, the divans folding down into comfortable beds.

Sunday is First Day of Autumn
Every year about this time the editor looks around, spots a reporter who has paused and rested his fingers, and says: “Write a piece about the first day of autumn.”

Back in the dear old golden-rule days on concession 10, school children were taught that autumn arrived at the time of the autumnal equinox – a period characterized mainly by equinoctial gales. The date was usually Sept. 21-22.

There was another equinox, the vernal one, about March 21-22, when spring blew in.

The Canadian Almanac quotes figures compiled by John F. Heard, Ph. D., of the David Dunlap Observatory, University of Toronto, to show that the date this autumn arrives in Sept. 22. The specific time mentioned is 15 hours, 38 minutes, which being interpreted, brings it to 3:36 pm., Eastern Standard Time, or 4:38 p.m., Eastern Daylights Savings Time. At that moment the Almanac says, the sun enters Libra.

So it is, that the autumn, the time of mellow harvest and all that, begins officially tomorrow afternoon. It is too easy to predict what kind of weather will be handed out, but on that date, the savants say, day and night will be of equal length. That is why it is called the equinox.